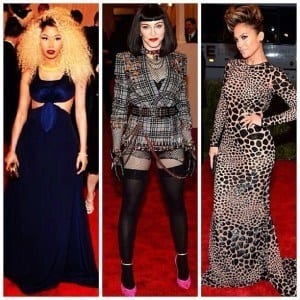 The Met Gala, benefiting the Costume Institute of the Metropolitan Museum of Art, honored the fashion elite on Monday in what’s known as the “Oscars” of fashion. Themed “Punk: Chaos to Culture,” the celebrities that attended showed off their unique, and sometimes quirky, punk style.

Rooney Mara, star of The Girl with the Dragon Tattoo, started off the Costume Institute’s annual gala with a bang. She wore a white lace Givenchy gown sporting a train long enough to need two people to make sure Mara didn’t trip. The look was capped off with her black lips, a look few can pull off, but which designer Riccardo Tisci said was his vision for Mara. Mara had a different view on her look.

“I don’t think that fashion-wise I am punk rock,” she said. “I think it’s attitude, more of a way of being. I don’t think I’m dressed punk.”

Mara hosted the Met Gala along with Tisci and Anna Wintour.

Many stars took the gala as an opportunity to push the envelope with their fashion. Singer Miley Cyrus went hardcore punk with a simple mesh Marc Jacobs dress that accentuated her dramatically spiked hair.

But there were others who didn’t completely understand the Met Gala’s punk theme. Kate Upton stood out in a green dress, but for all the wrong reasons.
“I didn’t understand the punk theme,” the supermodel said.

Last to arrive was the queen of punk herself. Madonna ended the Met Gala red carpet in a studded gray tartan jacket, fishnet stockings and bright pink pumps. The look was from the Givenchy Haute Couture collection, also designed by Riccardo Tisci.

When asked about her most rebellious fashion moment, the singer replied, “It changes by the day, by the hour.”

The gala is meant to be a sort of teaser for the Metropolitan Museum of Art’s Costume Institute’s new gallery opening on Thursday and running until August 14.