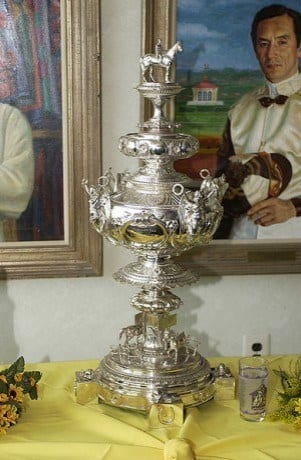 The Preakness Stakes, the second leg of the U.S. Triple Crown, will be run this Saturday in Baltimore.

The Preakness follows the Kentucky Derby in the race for the Triple Crown with the Belmont Stakes following.  As opposed to the Derby’s “Run for the Roses,” the Preakness has been dubbed the “Run for the Black-Eyed Susans.” The black-eyed Susan is Maryland’s state flower, but the race also received this name because a blanket of yellow and black flowers is placed around the winner’s neck.

Unfortunately, black-eyed Susans don’t bloom until nearly two months after the Preakness Stakes. Black-eyed Susans, therefore, are not actually used for the blanket. According to a radio story by WAMU, the American University radio station, daisies were originally used with their centers painted black until a type of chrysanthemums that closely resemble the black-eyed Susan were decided to be a better substitute.

The flower that is used has 50 petals as opposed to the black-eyed Susan that has no more than 21. But sewn onto a blanket, the effect is beautiful, and the differences are too subtle to notice.

At this year’s Preakness Stakes, I’ll Have Another has nothing to do with the number of mint juleps consumed at the Kentucky Derby. I’ll Have Another was the horse that took the blanket of roses in the first leg of the Triple Crown, and the horse has been named the second favorite in the Preakness.

Bob Baffert said he was thrilled to get the No. 7 post, stating, “With [Bodemeister], anything in the middle would be fine. With the Preakness, you just don’t want to be stuck on the inside where you have to use your horse a little bit. The Derby winner drew really well, also,” Baffert added of I’ll Have Another.

It looks like an exciting match-up between the horse run by the five-time Preakness winner and the winner of the Kentucky Derby. If I’ll Have Another takes this second race, he will have a chance to be the first Triple Crown winner since Affirmed in 1978.

These races are run by three-year-old Thoroughbred horses, so each horse only has one year to contend for the Triple Crown.

Like the Kentucky Derby, the Preakness has its own unique traditions. After the race is run, the colors of the winning owner’s silks are painted onto the jockey and horse on the weather vane at the top of the infield structure.

Spectators also sing Maryland, My Maryland, instead of My Old Kentucky Home as they did two weeks ago.

As the Preakness draws near, buzz is circulating about the top two favorites for this year’s race. Will owner Bodemeister lead Bob Baffert to his sixth Preakness win? Or will 2012 be the year of a Triple Crown winner? We will find out this weekend after the 1 3/16 mile Run for the Black-Eyed Susans (chrysanthemums).