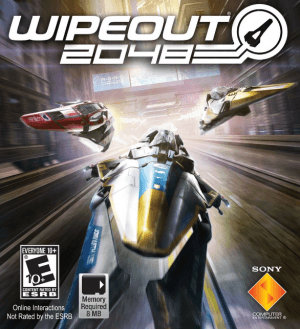 Racing games are a staple of any new videogame system launch, and the PlayStation Vita is no exception. Close to a month after its release, 5+ racers are available for Sony’s new portable console, but not all of them are worthy of your dollars. Here’s a rundown of the best – and worst – racers for the Vita.

Wipeout 2048’s vibrant color palette will trick your mind into thinking you’re playing on a PlayStation 3. Despite 7 opponents on the track at blistering speeds with weapons flying everywhere, there is no slowdown or hiccups. Cityscapes are detailed, neon billboards crisp, and quite frankly it’s a stunning showcase for the PS Vita’s capabilities.

“Wipeout 2048” is the complete package, and another hit from Studio Liverpool. In fact, it’s worth mentioning that Sony’s internal studios have crafted several top-notch launch titles, which is crucial to the Vita’s success moving forward. With minor exceptions (a lackluster, repetitive soundtrack and a short single player career), this is a complete console-class racer with an astonishing sense of speed, lush graphics, and weeks of competitive gameplay. Don’t be surprised if this stays at the top of your playing rotation. We suggest just buying it digitally so that you can launch it on a whim from the Vita’s home screen without having to hunt down that tiny game card. Another staple of console launches is “Ridge Racer” – for better or for worse. In the case of the uninspired Vita version, it’s much, much worse. The game gives you 3 courses and 5 machines – machines which are identical except for their appearance. Another “feature” is the complete lack of a single player campaign (with the exception of ghost races), in favor of a bare-bones socially-driven multiplayer mode.

In essence, this boils down to repetitive time-trials on 3 tracks, with the same vehicle. All for the low price of $29.99. “Ridge Racer Vita” is a disgrace to the iconic franchise, and Namco Bandai should be ashamed at charging $29.99 for this game. Our advice? Grab your iPhone and download “Asphalt 6” for $.99 (but avoid “Asphalt Injection” for the Vita – it’s the same game for $28 more). Which brings us to:

“Asphalt: Injection” is an ever-so-slightly enhanced version (you can use the system’s rear touch screen to imitate paddle shifters, for example) of “Asphalt 6,” a racer that goes for $.99 on the iTunes store. It’s a light-hearted, competent racer, but charging $28 more for the Vita version shouldn’t be legal. That being said, it’s an absolute steal for $.99, so if you have an iDevice, pick it up! Kart racers are all about arcade-y action, outlandish jumps and flips, wild, imaginative tracks, and collectibles and power-ups that weaponize your kart and add boosts to its speed or shield it from other players’ weapons. “Modnation Racers: Road Trip” has all of these things in its portable version of the popular PS3 title.

Best of all, players can create custom tracks and karts with ease (the touchscreen makes this chore much simpler than a controller would), then share them with other Vita players, or even download existing tracks created by PS3 players, which amounts to literally 1000s of extra courses.

Unfortunately, the game’s multiplayer element is stripped down, offering a variety of sharing options, ghosts, and time trials, but doesn’t deliver true, real-time races. Still, if you’re looking for a fun, whimsical kart racer to pass the time, you can’t go wrong here.

A miniaturized version of the bombastic Motorstorm series, “Motorstorm RC” takes the racing action from apocalyptic events with supercharged vehicles, to fun little tracks with remote-controlled cars. Using a top-down view of tracks inspired from previous Motorstorm games on PS3 and PSP, “RC” offers racing fans 12 tracks, a host of RC cars, a reasonable single player campaign, and multiplayer events. But those multiplayer events can also be played online with PS3 owners of the game. It offers substantially more content than Ridge Racer, and how about this: It’s completely free from the PS Vita store for a limited time.

The PlayStation Vita is available now for $249.99. College News highly recommends checking it out.

Author’s Note: Some of these titles were provided by the game’s publishers.