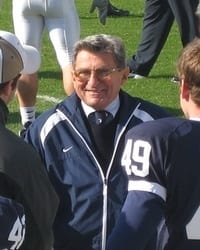 As a result of Sandusky abuse scandal, coach of 60 years to retire

Joe Paterno will end his coaching career at the end of this football season.

According to the Associated Press, Penn State head football coach Paterno has decided to retire at the end of this season, as a result of the recent sex abuse scandal taking over the school, involving former assistant Jerry Sandusky.

An AP source revealed that an official announcement will be made Wednesday.

The Penn State Littany Lions will face No. 17 Nebraska on Saturday, in Paterno’s final home game. Paterno, 84, is currently in his 46th season as coach of Penn State and his total of 409 victories are the most among major college coaches. He won the university national championship sin 1982 and again in 1986.

The Hall of Fame coach is an iconic figure at Penn State, where he has been an assistant or head coach for more than 60 years. He has raised millions in donations for the school and the library at the university bears his name.

University love of Paterno was made public Tuesday night as several hundred students gathered on the lawn of his home in a support rally after rumors of his possible termination arose. According to ESPN, chants of “We are Penn State!” and “Joe Paterno!” could be heard down the street.