Let’s face it, dorm life isn’t necessarily a glamorous one. The average size of a dorm is only slightly bigger than a prison cell and with the paint scheme and cement walls, you might even mistake one for the other. But don’t underestimate what you can do with 120 square feet, even if you’re living in a cramped area, you can transform it into your own personal home theater.

With the approval of your roommate, of course.

• Epson Powerlite Home Cinema 750HD – $799.99 – The first, and most important, item in your arsenal of entertainment excellence is your projector. While there are cheaper, portable alternatives, Epson’s Home Cinema 750HD gives a decent 720p image and weighs only six pounds.

Considering your space, the image will be sharp and crisp, even with your light on or sun pouring through your windows. There are eight different ports, including HDMI, composite, and the oft-forgotten VGA D-sub, as well as a speaker and the ability to reproduce up to one billion colors; that’s billion, with a ‘B’.

• Polk Audio SurroundBar 5000 Instant Home Theater – $399.95 – After visuals, the next most important aspect of home theater, even in a dorm room, will be audio. You don’t have need of an enormous seven-speaker system to get surround sound, especially when you can save money and space with only two.

Polk Audio originally designed the SurroundBar 5000 for fans of the Xbox 360, but this Bluetooth enabled system is perfect for your dorm. Piping out 280 watts, it also features one optical and two analog ports, which means less hassle when you switch from one device to another (and you will).

• Camp Chef’s Outdoor Entertainment Gear Big Screen 92 – $180.00 – You might think, “A camping screen? But I’m not camping.” Camp Chef’s Big Screen 92 is as perfect for outdoor use as it is for indoor use because of one reason: mobility. You may not want your home, err dorm theater up 100% of the time. That simple reason makes Camp Chef your ideal product. 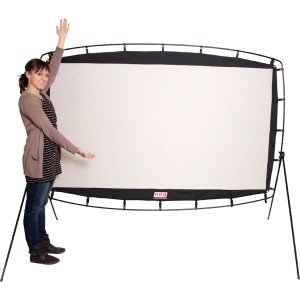 The screen can fit a 92” image, which will be plenty for projector in the space you have. Additionally, if you opt not to purchase the legs — an extra cost — you can hang this with the mounts included. Quick and easy setup and teardown, plus an additional carrying bag, means you have a screen on-the-go, just in case you want to bring the show on the road.

• Sumo Lounge Omni – $149.00 – To be frank, there is no better seating for a theater in your dorm than a Sumo Lounge. The Omni is their smaller model, shaped like a mattress, but it’s so easily manipulated that you can use it in a half-dozen ways. The interior is a memory foam-like bead, far more comfortable than the messy styrofoam ones you see in cheaper bean bags. Further, if you want to overstuff your seat, you can even purchase some extra to have the ultimate friend of your fanny.

• Logitech Harmony Smart Control – $129.99 – You don’t want to be stuck running up to the projector or sound system every few minutes to set a movie or mess with your audio. At this point your dorm theater is like the human body, with organs working in tandem to create perfection. It’d be awful if your body didn’t have a brain, and that’s exactly that Logitech brings to the table with the Harmony Smart Control.

Android or iOS, PC or Mac, it doesn’t matter what you’re running on, Logitech has you covered. It even comes with a remote, for those who have misplaced their phone. The Harmony Smart Control replaces your Xbox 360, television, and surround sound remotes and it works with nearly a quarter million devices. The only thing it doesn’t do is your homework.
• DormCubby – $189.99  If you’ve got all this hardware lying around and you’re able to setup and take down in minutes, you’ve got to have some place to store it all. Throwing it under your bed or into the corner means you’ll one day find it covered in “mystery fluids,” which is why Dorm Cubby is last piece of the dorm theater puzzle. Depending on your need, Dorm Cubby offers a variety of options from desk models all the way up to a full-on shelving unit for over your bed.

And there you have it, the ultimate space-saving home theater that will run you under $2,000. Cost and space is a factor when you’re a student and sometimes you have to forego some of life’s greater pleasures. That doesn’t necessarily mean all of life’s pleasures though, and for those who enjoy HD movies, television shows, and games, this system will be the envy of your friends. You can even use it to help with studying!