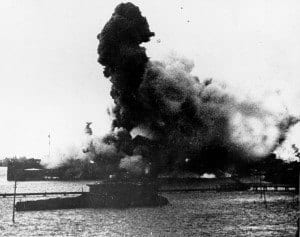 Wednesday will mark the 70th anniversary of Pearl Harbor Day and the event is being recognized with rare photos courtesy of Life magazine.

On December 7, 1941, Japan launched a deadly offensive against the United States in Pearl Harbor. President Franklin Roosevelt famously called it  “a date which will live in infamy.” As a result, 2,042 Americans were killed and the country was spurred to enter World War II.

As the country remembers the 70th anniversary of Pearl Harbor Day, Life is unveiling previously unseen photos detailing the aftermath and days that followed Pearl Harbor Day. Included in the photos displayed are photos of the exposed wreckage of the USS Arizona, Vice Admiral Joseph “Bull” Reeves on Waikiki Beach and photos of troops shore up defenses in Hawaii in the weeks after Pearl Harbor.

You can view photos of the aftermath of Pearl Harbor Day here.