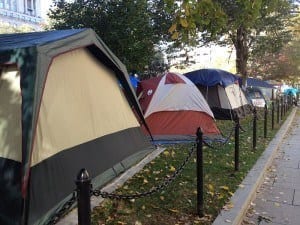 As noon on Monday passed, participants in the Occupy DC movement showed no signs of following the eviction notice fliers that were passed out over the weekend, according to USA Today.

Officials warned that they planned to enforce a no-camping rule and start moving out protesters.  The National Park Service had warned protesters that those who violate the camping rule at Freedom Plaza and McPherson Square would be subject to arrest.  But by mid-afternoon Monday nothing had happened.

Last week, republican lawmakers questioned why the Park Service has allowed Occupy protesters to camp for months on federal land. National Park Service Director Jonathan Jarvis said, “protesters have a right to be in the park and won’t be evicted, but they will be encouraged to sleep elsewhere.”  Protesters aren’t planning to pack up and go, but they are taking notice of the warning and trying to comply with the guidelines.

44-year-old protestor Barry Knight has been living at Freedom Plaza since Christmas.  He is under the impression police will arrive at night time when protestors start to sleep inside their tents.  “We have to have our tents open and not have our sleeping bags rolled out to show we’re not camping,” he said.

Knight said that if police begin to enforce the no-camping rule at night, he will sleep on the sidewalks of the city and return to the camp during the day.  His goal is to continue drawing attention to the movement, as well as the “thousands of people” who already live on the streets all over the country.