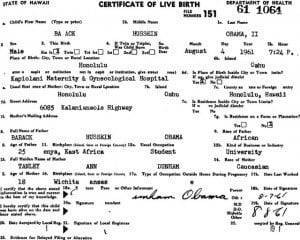 Obama’s birth certificate has come under scrutiny since it was released by the White House in April 2011 to quell rumors that the President was not, in fact, born within the borders of the United States.

Sheriff Arpaio organized a volunteer posse of investigators to determine the authenticity of President Obama’s birth certificate. According to Mike Zullo, the posse’s chief investigator, numeric codes on certain parts of the document indicate that those parts were not filled out, yet those sections asking for the race of the President’s father and his field of work or study were completed.

Sheriff Arpaio held a news conference Tuesday, saying, “At the very least, I can tell you this, based on all of the evidence presented and investigated, I cannot in good faith report to you that these documents are authentic.”

Arpaio continued, “My investigators believe that the long-form birth certificate was manufactured electronically and that it did not originate in a paper format as claimed by the White House.”

According to Sheriff Arpaio, he was “shocked” by the group’s findings. “My original intent was to clear the president of the United States,” said Arpaio, who has made a career of catering to conservative elements of the Republican Party by taking tough stands on issues including law and order, illegal immigration and the so-called “birther” issue.

Officials from the state of Hawaii have repeatedly confirmed the authenticity of Obama’s birth certificate and did so again on Tuesday.

“President Obama was born in Honolulu and his birth certificate is valid,” according to a statement from Joshua A. Wisch, a special assistant to Hawaii’s attorney general. “Regarding the latest allegations from a sheriff in Arizona, they are untrue, misinformed, and misconstrue Hawaii law.”

Wisch added that “not only are Hawaii’s vital records some of the best managed, but they also have some of the strongest restrictions on access to prevent identity theft and fraud.”

The Arizona Democratic Party immediately released a statement alleging Sheriff Arpaio’s investigation is intended to draw attention away from the problems facing his own agency, including hundreds of sex-crime cases that the sheriff’s office failed to investigate fully over a three-year period.

The sheriff’s office is the subject of a civil trial scheduled to begin Thursday. The lawsuit accuses Arpaio’s office of racially profiling Latinos. According to the Associated Press, “the suit is a precursor to a U.S. Justice Department lawsuit that alleges a broader range of civil rights violations against Arpaio’s office.”

The Obama campaign has declined to comment on Sheriff Arpaio’s allegations.

Previous ArticleNazis planned to kill Churchill with chocolateNext ArticleSofia Vergara is the highest paid actress on television, according to Forbes