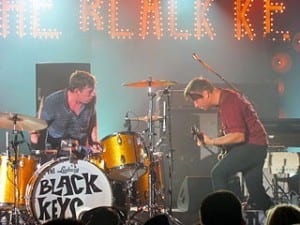 New albums from The Roots and The Black Keys, along with Amy Winhouse’s posthumous release.

So how was your Thanksgiving weekend?  I hope it was just super awesome, filled with stuffed stomachs, dosing off on the couch, and drunken relatives acting like a damn fool.  Now that you survived that, time to chill out with what’s in store for this week in music.

Man that was fast, wasn’t it?  I know they released “Brothers” in 2010, but, really, it seemed so much shorter than that.  Then again, if your band consisted of only two people, you’ll be pumping albums out are break neck speed too.  “El Camino” doesn’t bring anything new to the table other than the rawness of the blues-rock duo, which is all they need.  “Lonely Boy” is such an example, when some harsh guitars and thunderous drumming.

Everybody knew it wouldn’t be long after Amy Winehouse’s death before record executives start putting unreleased tracks from her catalog.  My thing is, if she wanted to put the tracks while she was alive, she would have.  The tracks were unreleased for a reason.  Or maybe she was going to put them out.  I don’t know.  Anyway, if you’re a Winehouse fan – which, I’m assuming, is a lot of you – then you should check this one out.  Included in the album are covers of “Will You Still Love Me Tomorrow” and “Girl From Ipanema”.  Also, there’s “Body and Soul”, a duet with Tony Bennett.

A few weeks ago, I let you guys know about the Roots – Betty Wright callabo “Betty Wright: The Movie”.  Now, I’m letting you know about the band’s new album, “Undun”.  The album tells the story of Redford Stephens, a young man who is thrown into a life of crime.  I know, it sounds like the typical cautionary of urban youth that’s been done thousands of times, but with “Undun” the Roots attempt to paint a more humanistic picture of the character, through tracks like “Tip The Scale” and “Make My”, to not to make him “hero nor victim” as the band put it.

And we end this little shindig on a funky tip via Asia.  While walking the streets of Asia, beatmaker Onra scooped up some vintage folk and pop Chinese records from the 60s and 70s.  Add some kick – ass beats to the mix and you have “Chinoseries pt 2.”.  Possible the most eclectic mix and East and West you’ll ever hear since Wu – Tang Clan and the movie “The Last Dragon”.  With tracks like “Fight or Die”, “No Matter What” and “Ms. Ho”, this will definitely be a head banger for any beat connoisseur.