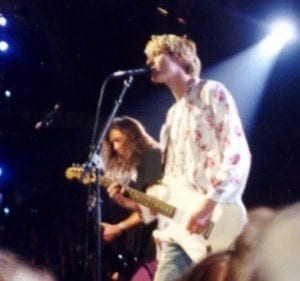 My Opinion, Mmm Hmmm, My Opinion

I remember the summer I was 11 years old. I’d been pestering my dad to learn how to play guitar. But as a kid, I’d get sidetracked and lose interest in the pursuit. I suppose dad never took me as being serious. But then, magic happened. I discovered a band called Nirvana. While I never can pin-point what drew mw towards their music, I remember thinking that I was going to learn the guitar.

I did, for the most part, learn to play the guitar. I learned every Nirvana song that I could. I remember coming home from school one afternoon and my mother looking worried. I asked her what was wrong and it was when she informed me that Kurt Cobain, the lead singer for Nirvana, was dead. I am pretty sure that sadness I felt that day, has lasted for the last 21 years.

Anyhow, I finally got to view the HBO premier of Montage of Heck, the Brett Morgan film that used graphic art, Cobain’s writings and pictures, as well as interviews with family and friends, to show the short, tragic, but amazing story of Kurt Cobain.
I really enjoyed the movie. It had some great home recordings that Kurt did, while living in his small apartment, which he and his then girlfriend Tracy Marander shared. It had some really neat things that any Nirvana fan could appreciate.

But here is where it became flawed for me. Courtney Love took to the interviews, discussing certain aspects of their marriage, Kurt’s life, his troubles, their child Francis Bean, and the heroin addiction that plagued his last few years. I’d be a liar if I said that I like Courtney.

It was her claim that she would have had more babies with Kurt had he not committed suicide, when we all know he was looking to divorce her, and that made the film lose credibility for me. I think Morgan did a great job, but Love sitting up there, acting like she was some sort of saint and that Cobain didn’t suffer from her wrath, is complete crap.
It is well known that when Kurt would be chatting with someone, and she felt like she wasn’t being in the spotlight, that she would ridicule him, call him a “pussy” and make a scene. I, as well as many other fans, who’ve read up on their volatile relationship, can attest that she was not a very nice person to the man to whom she’d married. Kurt worshipped her, trusted her, and yet she was always the one to make him feel like dirt.

Other than that, I really enjoyed the film, and it is a great tribute to the guy who changed music history by writing a song called Smells Like Teen Spirit, and found a place in the hearts of those who felt different from what the mainstream was telling us to be, and how to act. Montage of Heck is a pretty amazing film.