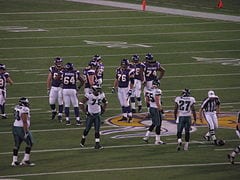 Vikings suspend defensive back without pay after felony charges

The Minnesota Vikings suspended defensive back Chris Cook Tuesday after he was charged with felony domestic assault.

The Vikings released a statement Tuesday night. “Today’s allegations against Chris Cook are very disturbing and disappointing,” the statement read. “At this time, he is suspended without pay from the team while we continue to gather information regarding the situation. We will have no further comment at this time.”

The charges stem from an alleged incident early Saturday morning at Cook’s Eden Prairie town home. Prosecutors say when officers arrived they found a woman sitting on the living room floor crying and hold the side of her head. Investigators say her nose was also bleeding.

The woman told police that after discovering she had had contact with an ex-boyfriend, Cook threw her on a bed, jumped on top of her and grabbed her throat. She also claims Cook threw her against a wall before choking her a second time.

Officers noticed marks on her neck and hemorrhaging in her eye that were consistent with strangulation.

Cook tweeted about the incident soon after his release. The first tweet read, “There’s always two sides to a story!” Cook is scheduled to make his first court appearance Wednesday.

If found guilty, Chris Cook faces up to a year in prison and $5,000 in fines.