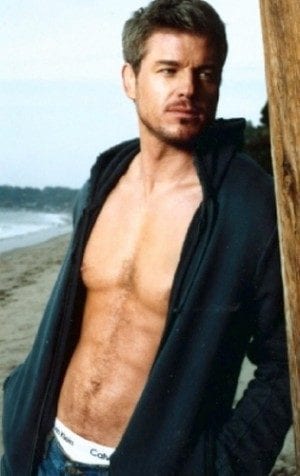 Eric Dane will no longer be caught hitting on the nurses of Seattle Grace Hospital as Grey’s Anatomy’s beloved McSteamy, fans learned last night. In the Sept. 27 premiere of the show’s ninth season, the character of Dr. Mark Sloan was killed off the show thanks to a plane crash that resulted in several shocking losses and injuries to the surgeons of Seattle’s fictional hospital.

The season eight finale of the show left fans in tears as several of Seattle Grace’s surgeons were stranded and injured or dying after a terrible plane crash. Eric Dane’s character was barely holding on when viewers last saw him. He was suffering from fatal internal injuries and dying after watching the love of his life, Lexie Grey (Chyler Leigh) die. The finale left fans wondering if the charming Mark Sloan would pull through. The season nine premiere answered fans’ questions when they learned that Mark was lying in a hospital bed with hours to live. After being in a coma for 30 days, the team took him off life support as his will requested.

It was an emotional episode for fans as beloved Mark Sloan was given a proper exit thanks to flashbacks of him healthy and happy. The flashbacks featured home video-style footage of the character at Derek and Addison’s wedding, a candid moment between Mc Steamy and McDreamy in which Sloan told Derek he was the best friend Derek would ever have. Another moment featured was Eric Dane’s character cradling the daughter he had with friend Callie Torres (Sara Ramirez). Both Dr. Torres and Dr. Sheppard held Dr. Sloan’s hand as he was let go.

After finishing the episode and wiping away tears, the question on all fans of the show’s minds is why Eric Dane chose to leave the long running ABC drama.

In an interview with TVLine.com back in July 2012, Eric Dane left Grey’s Anatomy on good parting terms with in the intention of moving onto other opportunities. He and Shonda Rhimes, the creator of the show, decided after much discussion that after all of the tears and laughs his character brought to the show, the storyline of Mark Slone should end.

“I am extremely grateful to everyone at Grey’s, ABC and Shondaland for the experience and memories I have had over the course of this run. It has been wonderful to work alongside and learn from a creative force such as Shonda Rimes,” Eric Dane told TVLine.com.

Shonda Rimes’ remarks to the site reflected the same graceful goodbye, stating that Eric Dane brought much to the Grey’s Anatomy family. “I wish him the best and I look forward to watching him as he continues to steam up the big and small screen,” Rimes told the site.

Eric Dane has appeared on the big screen with roles in Burlesque, Valentine’s Day and Marley & Me. Fans should be delighted to know that they have not seen the last of this handsome and talented actor, but sad to know his roles will no longer feature boob jobs and on-call room hookups.