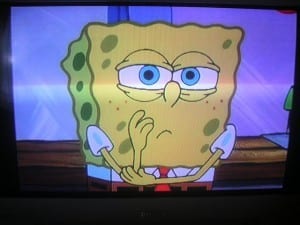 “SpongeBob Squarepants” is having a negative affect on children’s attention spans, a new study says.

As TODAY reports, “SpongeBob Squarepants” is a fast-paced cartoon, so much so that researchers believe it is simply too much for children to take in.

The study involved showing one group of four-year-olds a nine-minute clip of “SpongeBob Squarepants,” while another group watched a nine-minute clip of “Caillou,” a more realistic PBS cartoon. Yet another group of four-year-olds simply drew pictures for nine minutes. After the time period was up, researchers tested the executive function in each group’s members. Essentially, their ability to stay on task, persist on task and not be distracted was measured. The children who watched “SpongeBob” performed significantly worse in the tests than the other two groups.

The fast pace and crazy characters on “SpongeBob,” researchers believe, are just too much for young kids to take in.

“It confirms something that parents have observed for some time,” Dr. Demetri Christakis says. “They put their kids in front of television, particularly fast-paced programming, to quiet them down, but when the TV goes off, the kids are more amped up than they were before.”