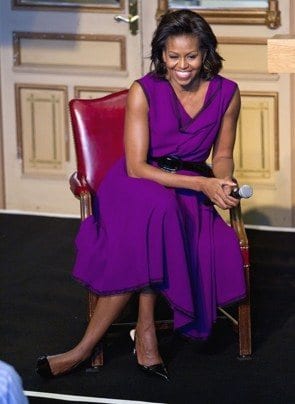 Michelle Obama made a passionate speech at a pair of campaign rallies in Colorado Wednesday urging voters to support her husband in the November election – for the children of America.

Michelle Obama made the same 30-minute emotional appeal in two visits to Colorado high schools and though her speech was scripted and, like the President’s many speeches, presented on a teleprompter the first lady spoke eloquently and passionately about her husband’s accomplishments and the future of our nation.

“That is what I think about every night when I tuck my girls in,” Michelle Obama stated at a Centennial, Colo. high school. “I think about the world I want to leave for them. I think about how I want to do for them what my dad did for me.”

“So if you want to know why I’m passionate, it’s because of them,” added Michelle Obama. “We cannot turn back now – we have come too far. But there is so much more work to do. There just is. So let me ask one question – one last question: Are you in? Are you in?”

At both stops, in Centennial and Pueblo, Colo., first lady Michelle Obama spoke of the sacrifices made by firefighters battling the High Park Fire ravaging Colorado, stating, “Our hearts and prayers are with all the families affected by the fires here.”

Michelle Obama also thanked volunteers for their contributions to the campaign effort while highlighting the importance of voter registration policies.

“This kind of grassroots work and getting people focused and fired up, that work is the core of this campaign,” Obama said.

“Will we continue the change and the progress we’ve made? Or are we going to let everything we’ve worked so hard for just slip away,” Michelle Obama implored the audience for a passionate response.

“In the end it all boils down to who you are and what you stand for,” Obama added.