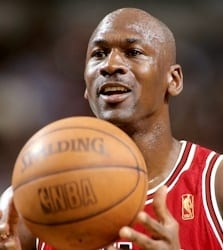 Michael Jordan turns 49 today, though he doesn’t have much else to celebrate this year.  The NBA legend owns the Charlotte Bobcats who, this year, are 3-26 and Jordan recently lost a lawsuit against the Midwestern based grocery chain, Jewel-Osco, who used his infamous number “23” in an “ad-like magazine layout.”

Michael Jordan was recently spotted at a Bobcats game against the Chicago Bulls sitting next to his fiancée, Yvette Prieto.  According to CBS, Jordan has stayed quiet as the pile of losses slowly mounts.  The Bobcats have lost 16 games in a row, giving the team one of the worst winning percentages in NBA history: .103.

In 2009, Jewel-Osco published an “ad-like layout” in Sports Illustrated congratulating Michael Jordon on his Basketball Hall of Fame induction.  The ad included a pair of basketball shoes with the number “23”, Jordan’s jersey number, and the Jewel-Osco logo underneath.  On Thursday, a judge ruled the ad was constitutionally protected free speech.  According to The Huffington Post, U.S. District Judge Gary Feinerman said, “The page does not propose any kind of commercial transaction, as readers would be at a loss to explain what they have been invited to buy.”

Michael Jordan’s attorney disagreed with the ruling, according to The Huffington Post because, “several witnesses admitted the layout was intended to promote Jewel-Osco’s goods and services.  ‘That,’ he said, ‘is an admission that the ad was commercial speech.’”

“Celebrities such as Jordon meticulously guard their images, and others have successfully sued companies for appearing to employ praise as a way to slip in references to a public figure into an advertisement,” The Huffington Post reports.  Kim Kardashian last summer sued the Gap for using a model that “looked like her” and sought $20 million in damages.