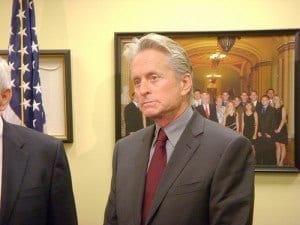 Michael Douglas is either severely misunderstood or all sorts of crazytown banana pants.

Over the weekend news broke that Michael Douglas said to The Guardian that his throat cancer is caused by oral sex…and also cured by it?

Michael Douglas was diagnosed with throat cancer in 2010, believing it to be the result of heavy drinking and smoking, and you know, science. Now he has gone back on that statement, instead blaming the cancer on HPV (human papillomavirus.)

Truth be told, this is probably one of the stranger sentences to exit the mouth of a human being. Nevertheless, after careful examination, it must be said that Michael Douglas never actually claimed that his cancer was caused by oral sex.

Along with being an over-enthusiast of the smoke and the drink, Michael Douglas is also a sex addict. So while his statements may seem a little ludicrous, the man who played Gordon Gekko might know a thing or two about the STDs.

The interview with The Guardian revealed that Douglas also seems to subscribe to the notion that oral sex can cure the cancer just as it causes it.

Douglas’ wife Catherine Zeta-Jones is probably interested to hear the answer as well.