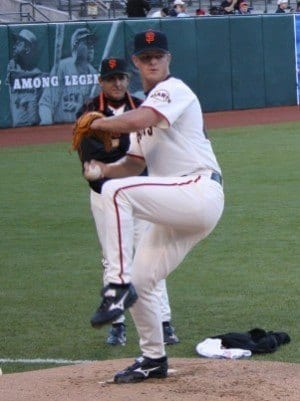 Matt Cain lived every pitcher’s dream Wednesday night. Pitching a perfect game in baseball is one of the most difficult things to do. However, this year’s major league pitchers are settling for nothing short of greatness as pitchers from the Seattle Mariners, the New York Mets, the Los Angeles Angels, and the Chicago White Sox have all pitched a no-hitter this season. San Francisco Giants Matt Cain was added to the list of great pitchers as he pitched arguably the greatest perfect game in baseball history.

“Things like this bring a team together even more,” said San Francisco Manager Bruce Bochy.  “That’s the first one I’ve seen. It was an incredible night. Matt was going about it like a normal game. That last at-bat he sprinted to first base and I yelled, ‘Hey, take it easy.’  But he always plays the game hard.”

Matt Cain pitched a 10-0 masterpiece against the Houston Astros with 125 pitches – most ever in a perfect game – in which 86 were strikes. Coupled with a pair of improbable catches by Melky Cabrera and Gregor Blanco, Matt Cain controlled most of the game’s outcome that was the first perfect game and the 14th no-hitter in the Giant history. Tying Los Angeles Dodgers Sandy Koufax’s perfect game against the Chicago Cubs in 1965, Matt Cain threw 14 strikeouts and allowed only seven balls out of the infield.

“I’m still pumped,” said Cain. “I haven’t really had a ton of time to sit down and look over stuff, see how it all happened. I don’t know that it has hit me yet, maybe when I can sit down and watch the highlights, go over the game.”

As of this season, the two-time All-Star is the highest paid right-hander with a $127.5 million, six-year contract. Matt Cain has been building up anticipation for his perfect game with a one-hitter against Pittsburgh in the home opener, a nine-inning shutout against the Phillies and an eleven-inning victory against the Giants.

“It’s something I always wanted to do since I was little, but it’s kind of a blur when it actually happens,” Cain said.