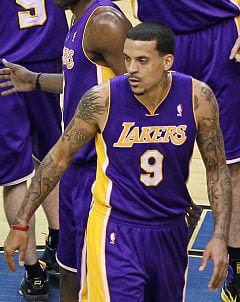 Los Angeles Lakers forward Matt Barnes has announced that he has split with his fiancée, reality star Gloria Govan.

Barnes, 31, and Govan, who stars on the reality show “Basketball Wives,” are throwing in the towel after a series of ups and downs, including a delayed wedding and domestic violence charges, according to the Los Angeles Times. The couple has two sons together.

Barnes released a statement Wednesday, in which he wrote, “I’d like to address the rumors surrounding mine and Gloria’s relationship. We have reached the difficult decision of ending our relationship and will be going our separate ways at this time. We will work together to raise our sons and wish each other only the best.”

In September, Barnes was arrested in Sacramento, Calif. on charges of domestic violence, allegedly in part for keeping Govan from using a telephone. A day after his arrest, Govan told the media the entire incident was a misunderstanding.

Barnes has recently been rumored to be dating Eva Longoria, a rumor shot down by the actress herself. “Matt Barnes and I are not dating! We are doing a charity event together for Padres and Athletes vs. Cancer,” the “Desperate Housewives” actress wrote on her Who Say account.

Barnes and Govan have also turned to the internet to expose their feelings. During a Twitter exchange with a fan, a person suggested Barnes should marry Govan or someone else will. Barnes responded, “He can have her!!!!!!!!!!!!!!!!!” Meanwhile, Govan retweeted the following message on Saturday, “If someone is dumb enough to walk away, be smart enough to let them go. Your destiny is never tied to anyone who leaves you.”