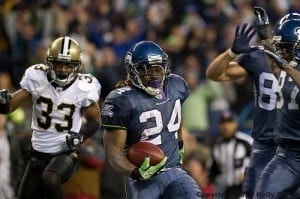 Running back will see another season of skittle showers

Marshawn Lynch, with just hours to spare, signed a four year contract on Sunday with the Seattle Seahawks in the prime of his career.  According to the Chicago Sun Times, the $31 million contract is keeping the skittle-loving running back in a Seattle uniform and, according to head coach Pete Carroll, keeps a player with an attitude that he wants the entire team to embody.

Marshawn Lynch last season rushed 1,204 yards and ran 12 touchdowns. Lynch landed a franchise-record of eleven consecutive games with a touchdown. Marshawn Lynch’s fame grew and by the end of the season, his home touch downs were being celebrated by the crowd showering him with Skittles.

Marshawn Lynch was traded from the Buffalo Bills, where he ran into trouble off the field, to Seattle in 2010. In a Seahawks uniform, he became the first running back to rush 1,000 yards since Shawn Alexander in 2005. According to the Miami Herald, Marshawn Lynch “became a fan-favorite in Seattle after he would routinely break huge runs and squeeze out of almost inescapable tackles to lift his team, something he called going ‘beast mode.’”

Seahawks general manager John Schneider said, “We are excited to keep Marshawn as part of what we are building. This is what we were hoping for when we acquired him from Buffalo.”

According to reports, since Marshawn Lynch is locked in with a contract, the Seahawks have their eye on free agent, defensive end Red Bryant, who has said he can’t imagine playing anywhere else other than Seattle. However, no official deals have been made.