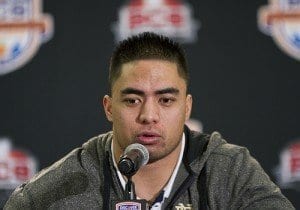 Manti Te’o, star Notre Dame linebacker, is perhaps one of the most famous victims of the “Catfish” phenomenon – an abuse of social media in which people are duped into online relationships via false Facebook identities.  The term “Catfish” stems from a (possibly fake) documentary in which Nev Schulman’s Facebook hoax relationship is investigated by brother and friend.  Unfortunately, Mormon Hawaiian linebacker Manti Te’o was already in the spotlight as his own relationship hoax was beginning to unravel, leading him to panic and briefly lie about the reality of his “dead” girlfriend, he revealed on an interview with Katie Couric set to air tomorrow.

Finally breaking his silence about the twisted affair, in which his girlfriend of three years supposedly died, Manti Te’o opens up to Couric about his initial reaction when his supposed deceased love called him up on Dec. 6, three months after her “death.”  The call came just days before Te’o was set to appear on national TV as a Heisman trophy nominee, and in anticipation of national spotlight the linebacker apparently continued to perpetuate the elaborate story he was inadvertently cast in.

“You stuck to the script. And you knew that something was amiss, Manti,” Couric said.

“Katie, put yourself in my situation … This girl who I committed myself to died on Sept. 12,” Te’o said.  “Now I get a phone call on Dec 6. saying she’s alive, and that I’m going to be on national TV two days later, and they ask me about the same question. What would you do?”

Fans, admirers and the general public are ticked and skeptical of the extent of Te’o’s knowledge of Lennay Kekua’s existence over the past months.  Their heartbreaking story of the linebacker who played through the grief of his grandmother’s and girlfriend’s deaths was a convenient crowd pleaser during Notre Dame’s already undefeated season, and as time goes by and the hoax unravels revealing ever more, the public feels betrayed.  This interview follows just one week after Lance Armstrong, another celebrity disappointment, admitted to doping on Oprah.