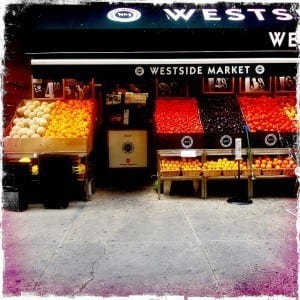 Man aisle: for your one-stop-shop. A New York City grocery store launched the city’s first “man aisle” to make shopping a less arduous task for men. The portion of the store dedicated to dude-only items includes everything from condoms to steak sauce to razors and liquor.

“If you’re going to have some guys over to watch a game, you can pretty much stand here – not move two feet – and get your beer, barbecue sauce, chips, whatever. It’s all right here!”

Joskowitz and the store’s CEO, George Zoitas, came up with the idea for the man aisle after reading an ESPN study that revealed more and more men are shopping for their families. What was 14 percent in the 1980s has now risen to 31 percent.

The two began to brainstorm ideas for what they originally termed, “The Man Isle.”

“We picked a couple of joke items – we could have chosen any ordinary coffee, but we picked Chock full o’Nuts,” Joskowitz chuckled. “But then a couple of us got a little overboard, so we tried to tone it down to not offend anyone.”

“Guys don’t like taking lists when they go shopping,” Zoitas added. “This helps them remember what they need.”

If the concept of the man aisle is a success, Zoitas and Joskowitz plan to expand it to four other locations in Manhattan and New Jersey.

“We think this is going to be a lot of fun,” Joskowitz said.

Westside Market NYC, located at 110th Street and Broadway in Manhattan, has also created a “Men’s Supermarket Survival Guide.” According to a press release from the market, the guide contains, “helpful tips and tricks for saving time, money and picking out the best ingredients.”

“I think it’s a great idea,” Andy Huber, 23, of Harlem said of the man aisle. “I don’t like to spend much time in the grocery store, so having this aisle makes things much easier for me.”

But, not everyone is convinced man aisles are such a great idea. According to Business Insider, “The average dolt might roll his eyes at this, but for the rest of us with a functioning brain, we have to ask ourselves: Just what were marketers thinking when they rolled out man aisles?” One can only imagine they had “visions of scraggly men-children lost in the feminine hygiene section” running through their minds.

The question remains: If the idea for a man aisle came about from seeing that more men are shopping for their families, then why does the man aisle only contain items intended for men? It seems it’s more of a “bachelor’s aisle” than a “man-shopping-for-his-family-aisle.”