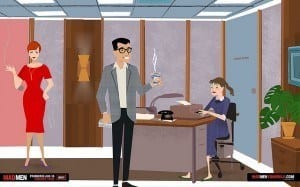 AMC’s Madmen made its return to the small screen last night after a nearly 17-month hiatus. Madmen kicked off its fifth season with a two-hour episode entitled Last Kiss.

The lag time between episodes left many questions on fans minds, like did Don Draper marry Megan? What year would the series pick back up in? Will Madmen ever come back to television?

Madmen leading man Don Draper did indeed go through with his marriage to his former secretary, and the new Mrs. Megan Draper is now part of the ad company’s creative team, working under Peggy Olson.

Madmen reopened on Memorial Day 1966, during a civil rights protest. Joan Harris, Christian Hendricks, gave birth to a baby boy, and unbeknownst to her military husband, Roger Sterling is in fact the father.

While much of the episode situates itself around Don Draper’s new, relaxed attitude, the mood quickly shifts when his new buxom wife throws Don a surprise 40th birthday party, thrusting his work and personal life together. This collision of his two worlds, topped with Mrs. Draper’s birthday burlesque show leaves Don soured, and the two spend the rest of the episode fighting. Megan’s performance is also the talk of the office the following day, which only fuels the flames between her and Don.

The season five opener of Madmen ended with Don and Mrs. Draper having sex on their filthy white carpet a day after the party.

During Mrs. Drapers burlesque show, she performed a rendition of Zou Bisou Bisou, which the producers of Madmen were so impressed with the single is now being sold through iTunes.