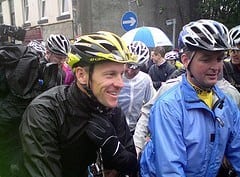 Lance Armstrong has confessed to using performance-enhancing drugs in an interview with Oprah Winfrey taped Monday, marking the end of a decade of denial by the cyclist.

A 7-time Tour De France winner, Lance Armstrong was banned from cycling for life in October of 2012 by the U.S. Anti-Doping Agency. Armstrong had previously denied any doping allegations, but recently decided to sit down with Oprah for a ‘tell-all’ interview. ABC News has reported that Armstrong confessed his drug use during the interview.

The interview, according to Oprah, lasted 2 hours and 30 minutes and was described as very “emotional”, though Oprah said Lance Armstrong was “forthcoming” about his drug use during his dominant run in cycling.

“We were mesmerized and riveted by some of his answers. I feel that he answered the questions in a way that he was ready,” said Oprah, appearing on CBS This Morning on Tuesday. “He certainly had prepared himself for this moment. … He brought it. He really did.”

According to CBS News, Winfrey met first met with Armstrong at a secret lunch in Hawaii. Armstrong had previously denied the interview request, but changed his mind upon meeting with Oprah.

Before the interview, Lance Armstrong visited his LiveStrong Foundation and spoke to about 100 staffers. It’s unknown whether he confessed his drug use to his staffers, but he did apologize at length to them, according to ABC sources familiar with the situation.

The World Anti-Doping Agency, meanwhile, said that Armstrong must confess under oath if he wishes his lifetime ban from sports to be reduced. The organization previously said Armstrong’s ring of drug use was “the most sophisticated, professionalized and successful doping program that sports has ever seen.”

Armstrong has said he wishes to return to sports at some point to compete in triathlon events.