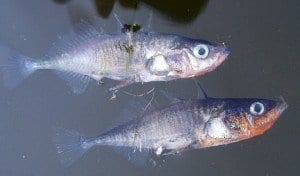 Thousands of dead fish and seagulls wash up on the northern shores of Lake Erie.

Lake Erie is experiencing an eerie phenomenon up on its northern shores. Tens of thousands of dead fish and seagulls floated to shore Wednesday afternoon according to Canadian officials. The cause of the mass deaths is still unknown and researchers are working to figure out why the sudden and mysterious event occurred.

The dead fish and seagulls are scattered over about 25 miles of northern Lake Erie coastline in Canada. Member of Provincial Parliament for the Progressive Conservative Party of Ontario Rich Nicholls oversees sections of the shore community that saw the dead fish wash up.

“First thing that crossed my mind, is there any potential danger to humans from a health point of view?” Nicholls said. “Secondly, as I got more and more into it, what’s the cause of this sudden fish kill in the lake?” Nicholls also speculated about a possible manure dump that had an alarmingly negative effect on the fish in the lake.

But, the Ontario Ministry of Natural Resources and Ontario Ministry of the Environment think otherwise, stating that the fish most likely died of natural causes as there is no evidence of an industrial spill or chemical pollution in the lake. A possible reason for a naturally occurring mass death in Lake Erie could be a lake inversion. During an inversion, the cold and warm layers of water change quickly and the fish suddenly find themselves in less dense, less oxygenated water. The fish then risk suffocation.

Researchers believe this to be the main cause for the deaths, although they are still taking precautions and looking into other options. While the water tests have not produced any evidence of pollution, officials are still waiting on lab results for the dead fish. Carp, sheepshead, perch, catfish and suckers were among the types of fish found on the shore.

As of right now the mass amount of dead fish on Lake Erie shores remains yet another mystery in a long line of recent mass animal deaths across the U.S., noting the dead birds in Arkansas, California, Kentucky and Louisiana and the dead fish on Maryland’s shore.