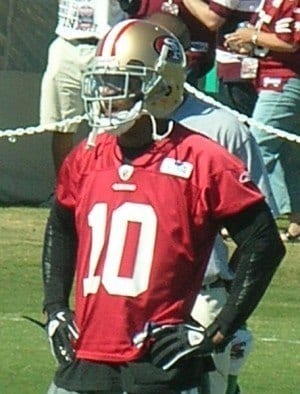 Following the Giants’ 20-17 win over the 49ers Sunday night, the 49ers have been receiving a lot of negative attention. Unfortunately, Kyle Williams has gotten the worst of it, with some fans even threatening him.

Many alleged fans tweeted vitriolic and violent comments to Kyle Williams on Sunday. One such tweet read, “Hey @kylewilliams_10 u suck u dumb bitch. I hope you die,” and another that received many retweets read, “@KyleWilliams_10. I hope you, youre wife, kids and family die, you deserve it.”

Many fans and spectators, however, were offering some much needed sanity. “Stunning, ridiculous, infuriating that Niners WR Kyle Williams would receive death threats. In the end, still a GAME!!! Perspective please,” one tweeted.

Williams’ teammates were also quick to defend him, CBS Sports reports. “We all lost this game,” tight end Delanie Walker said. “We play as a team — it’s 45 of us out there. It’s not Kyle’s fault, so don’t go over there and act like it is. Cause it’s not.”

Read more about Kyle Williams and the 49ers here.