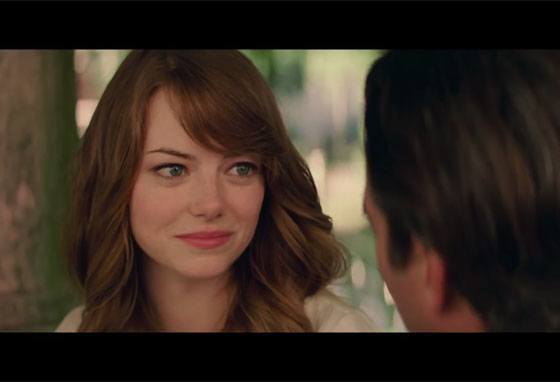 In Woody Allen’s most recent release, Joaquin Phoenix plays his most unsympathetic character since his turn in Gladiator. Here, he is a self-absorbed philosophy professor at a liberal arts college in Providence, Rhode Island. He has a cult following and a round-the-clock Scotch whisky buzz. And because the ladies love surly, brooding intellectuals, Parker Posey (as an age-appropriate fellow professor) and Emma Stone (as a too-young undergraduate student) both make clumsy plays for him. He’d rather get drunker and freak people out at a student party with an impromptu game of Russian Roulette.

In a restaurant booth with Stone’s character, he overhears the sad story of a local divorcee on the short end of a child custody case. Why he finds this woman’s plight so compelling isn’t explained, nor is his lack of curiosity about the husband’s side of the story. Because he’s deep and philosophical, he decides he must take bold action and (spoiler alert) murder the judge in the case. Instead of being a bold Man of Letters, he just comes across as one of those creepy teenagers who think Nietzsche was writing about them personally.

You should also read: Woody Allen’s Midnight in Paris review

A recurring theme in most of Allen’s films since around 1989 has been the importance of creating one’s own “moral universe.” (This is first addressed by name in Husbands and Wives by Rob Reiner’s character, but the roots of it go back as far as Crimes and Misdemeanors, if not farther). Allen has become to this theme what M. Night Shyamalan has become to twist endings. The difference is, Shyamalan still has time to outgrow it.

A lot of people knock Allen kind of reflexively these days, and I don’t want to be one of them. This film is beautifully shot; is there a more gorgeous college town than Providence? The performances were all quite fine. I understand that protagonists don’t need to be sympathetic every time, though this film might have benefited from making Emma Stone’s character the central one (without it becoming a remake of 2006’s Scoop). The soundtrack, heavy on modern jazz, is first rate. Even Allen’s failures are worth watching, and lately he’s been hitting about .300, pretty good for cinema’s greatest baseball fan. Blue Jasmine got a lot of acclaim, and I would personally rank 2011’s Midnight in Paris as one of my favorites.

Phoenix’s character Abe has depth, but lacks breadth. Does he believe Providence benefits from losing a bad judge and gaining a mass murderer? As a practical matter, does he think it’s a good idea to tell a bunch of people how great it would be if the judge were killed, before attempting to do it? His research on how to kill somebody was comically slight (which reminds me: this isn’t a comedy and doesn’t have many light moments, a valid thing to ask before you see a Woody Allen film). It’s a little unclear whether this college philosophy professor owns or uses a computer; I’m sure there are internet message boards about the relative merits of cyanide, arsenic and digitalis as death delivery systems.

Another running theme—also consistent since Husbands and Wives, but the roots go back much further—is that fidelity is for suckers, that if you stay in a monogamous relationship, you are being dishonest with yourself and therefore immoral within the context of your own moral universe. Rita, Parker Posey’s character, is married but willing at every stage of her acquaintance with Abe to shitcan her marriage for a fling with a psychopath. Jill, Emma Stone’s character, is also in an apparently monogamous relationship with a fellow student; as soon as she goes gaga over her brooding rebel of a philosophy professor, suddenly she keeps saying “Of course, we never committed to being exclusive…” Do committed, long-term relationships exist in this director’s world? Woody’s a gifted filmmaker, but I’m increasingly glad I don’t live down the street from him.

If you’re already a fan of Woody Allen, Joaquin Phoenix or Emma Stone—and I’m generally inclined to like the work of all three of them—by all means see this in the theaters or wait a while and rent it on iTunes. Absent that connection, though, I’m on the fence about whether or not to recommend it on its thematic merits.