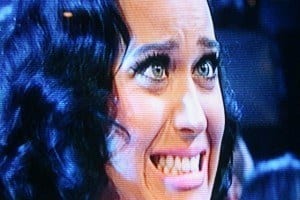 People in costumes dancing on stage apparently too disturbing for grown adults.

I don’t pay much attention to award shows, but when an unlikely controversy arises during one of them because of crazy, fanatic reactions by highly religious celebrities, I can’t help but take notice. However, I must preface by saying that I in no way shape or form consider myself a fan of Katy Perry. I think her music is just awful. As a matter of fact I’m pretty sure I dislike everything about Katy Perry.

But regardless, Katy Perry’s terrible monotonous music is no valid reason to shame an otherwise impressive and artistic performance as “witchcraft” or “demonic glorification,” as Glenn Beck puts it. Moreover, I’m pretty sure no reason at all exists to accuse anything of witchcraft since we don’t live in medieval England or 1690’s Salem, Massachusetts—on top of which the idea of witchcraft simply being a completely ludicrous fiction. Yet Glenn Beck seems to think “It’s full-fledged witchcraft and demonic glorification.” (The video of her performance can be viewed here: http://www.youtube.com/watch?v=HWfD_TXs4fE and Beck’s crazy rant: http://www.youtube.com/watch?v=ObSAZPrKPLU)

I find this truly shocking even though I probably shouldn’t. Regardless, here’s a guy who has found a great deal of success in various media ranging from TV to radio to print; he’s authored six New York Times bestsellers, is the founder and CEO of Mercury Radio Arts, and clearly possesses the ability to think to some degree. Yet he believes in such primitive, millenia-old boogeymen as witches and demons.

But he doesn’t just believe in them; he believes Katy Perry—of all people—is glorifying and/or engaging in these activities at—of all places—the Grammy’s. I mean if Glenn Beck seriously believes all the nonsense he’s been spewing about her stage performance, he’s going to be pretty shocked when he finds out they made movies out of those Harry Potter books.

But I can’t just pick on Glenn Beck since he, disappointingly and predictably enough, wasn’t the only person to draw the logically sound “demonic” interpretation from her performance. Popular Christian gospel singer Natalie Grant (know who she is? yeah neither do I) tweeted, “We left the Grammy’s early. I’ve many thoughts, most of which are probably better left inside my head. But I’ll say this: I’ve never been more honored to sing about Jesus and for Jesus. And I’ve never been more sure of the path I’ve chosen.”

Her reaction to a stage performance no more disturbing than Michael Jackson’s “Thriller” video was to get up and leave early. As if this is Batman Begins or some **** and she’s a little skittish 8-year old Bruce Wayne about to get his parents killed. Most sane people might interpret the performance as a corny, 90’s horror movie-like attempt at being innovative, but there’s always the psycho devout Christian Bible-thumping witchcraft-believing demon-fearing highly conservative interpretation that is, “ewww that creeps me out, therefore SATAN!”

And as most might be able to imagine, there are thousands more who share this ridiculous view. Twitter is rife with tweets such as: “Now all the little girls who look up to Katy Perry will worship Satan!!!” and similar remarks. I can’t help but be reminded of one of my favorite quotes by the late, great George Carlin: