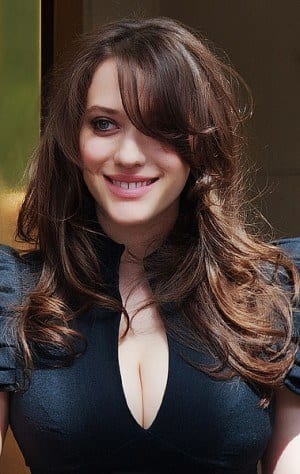 Kat Dennings has caught the attention of both fashion and television critics for her tell-it-like-is, sexy charm. The star was a hit at the 2012 Emmy Awards Sept 23. for her sultry scarlet gown, and fans will see more of her as the CBS sitcom 2 Broke Girls returns for its second season Sept. 24.

The style councils are abuzz with praise for Kat Dennings as she made the bold choice of attending the Emmys in a red J. Mendel gown. Calling to mind the sexy Jessica Rabbit, Dennings opted for the gown that brings attention to her lovely décolletage.

Kat Dennings’ style choice is not the only thing going for her as 2 Broke Girls returns for its second season. The sitcom known for its crude humor and stereotyping of ethnic characters was met with critical reviews, and yet viewers enjoyed the show in its first season. It was the most popular new comedy on TV last season, averaging 11.3 million viewers a week, according to the NY Daily News.

2 Broke Girls follows the trials that Kat Dennings’ character Max Black and Bethany Behrs’ character Caroline Channing must face while trying to start a cupcake business from the ground up. Max, who has always lived a scrapping-by lifestyle gains a friend and roommate in the fallen socialite Caroline. The series follows the unlikely pairings’ hijinks while trying to make money serving tables in a Williamsberg diner, which is full of diversity and sexual taboos.

Michael Patrick King and Whitney Cummings, two people that have always pushed the envelope, created the series. King is known for his work with Sex and the City and Cummings is a comedian known for her blunt and unafraid humor when it comes to controversial topics. The show, thanks to its writers and creators, is a playing ground for candid conversation between Kat Dennings’ and, fellow broke girl, Beth Behrs’ characters. This aspect of the show makes a viewer either love it or hate it.

The once scarlet-gowned Kat Dennings can be seen on CBS Sept. 24 during the 2 Broke Girls premiere, returning as the self-deprecating and unapologetic Max Black in her mustard yellow and orangey-red diner uniform.