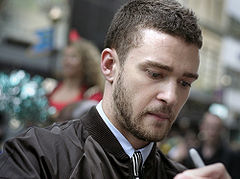 After receiving Corporal Kelsey De Santis’ YouTube invitation, the singer/actor agreed to be her date for the event, which he called on his blog, “one of the most moving evenings I’ve ever had.”

Timberlake was asked out by De Santis after he encouraged his “Friends With Benefits” co-star Mila Kunis to accepts a video invite to the upcoming Marine Corps Ball during a Fox News interview.

Timberlake said he was more nervous than De Santis to attend the event. In his blog, Timberlake called De Santis “humble and honest.”

He said, “It hit me all of a sudden that these were the type of people who look after us and our freedom…Humble, concerned for others before themselves…This was the type of person our Marine Corps was building. I was blown away.”

De Santis tweeted, “The ball was epic! Had a wonderful time.”

“I don’t ever get asked out, ever, so I was very flattered by that,” said Timberlake.
Kunis will attend the ball with her date Sgt. Scott Moore later this week.