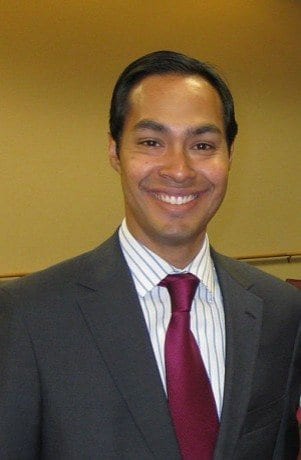 Julian Castro, San Antonio Texas’ Mayor and the keynote speaker at last night’s Democratic National Convention, swats away talks that he may one day be in President Obama’s shoes.

Castro, who was regaled as the first Latino to speak at the Democratic National Convention, airs nothing but modesty for his upbringing. The 37-year old Mayor recounted his Mexican heritage through an anecdote of his immigrant grandmother, who left Mexico as a child and did not make it past the fourth grade, instead working as a maid, cook and babysitter before eventually learning to bilingually read and write.

Castro emphasized that only in America could the descendant of someone like his grandmother earn a place in politics, citing the American Dream as making it all possible for him and his U.S. Congress-bound twin brother Joaquin.

A grandson of an immigrant, Castro went on to praise President Obama for his actions regarding the Dreamers, those young, law-abiding immigrants seeking to be rid of the fear of deportation, who strive to live in America with the same hopes and dreams as his ancestors’.

But it was not only the subject matter of Castro’s speech that enthralled everyone from Democrats in attendance to the people watching at home. Rather, Castro’s cool and confident demeanor is what raised questions as to where the young politician will be in four years time.

Castro’s invigorating speech is the talk of the town in Democratic and Latino communities. Seeing as the Latino population has grown ten percent in the last thirty years—from 6% to 16%—making them the largest minority in the country, Castro’s ability to differentiate the issues between Obama and Romney might prove crucial for Democrats come November.

Ever so modest, Castro is not buying the hype. The San Antonio Mayor says he will remain in S.A. for the next several years, granted the public will have him.