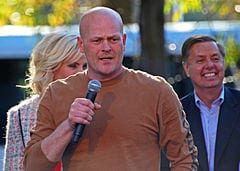 “Joe the Plumber” of 2008 presidential campaign fame, announced Tuesday evening that he is running for Congress.

Samuel “Joe the Plumber” Wurzelbacher said he will make the bid as a Republican in Ohio’s 9th Congressional District, a seat that is currently held by Rep. Marcy Kaptur (D-Ohio). Wurzelbacher made his announcement at a Hungarian restaurant in Toledo.

“Politicians keep laying politics with our lives. I’m sick and tired of it. I thought long and hard about running and why I would do it,” said Wurzelbacher, according to a video of his announcement on YouTube, “I’m not the kind of plumber who uses duct tape.”

Wurzelbacher intends to take advantage of the fame he gained after the media captured him confronting then-candidate Barack Obama on the 2008 presidential campaign. Wurzelbacher is running as a Republican because he would not stand a chance at winning as a Democrat, he said.

The race will be closely watched, not just because of “Joe the Plumber,” but because incumbent Kaptur will be fighting Rep. Dennis Kucinich for the Democratic primary, as he lost his seat due to redistricting.