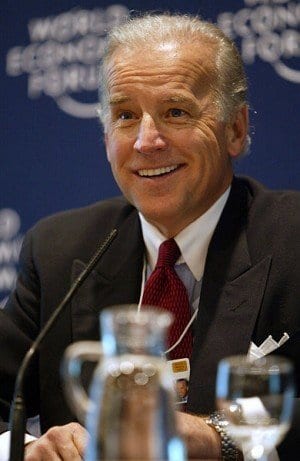 Vice President Joe Biden appeared on Meet the Press on Sunday and gave his personal views on gay marriage—a few of which have gotten the Obama administration in trouble because the President hasn’t necessarily conveyed the same opinions.

Joe Biden, although he didn’t say it out right, told Meet the Press that he supports gay marriage and would like it to become a main issue should Obama be re-elected.

“I am absolutely comfortable with the fact that men marrying men, women marrying women, and heterosexual men and women marrying another are entitled to the same exact rights, all the civil rights, all the civil liberties. And quite frankly, I don’t see much of a distinction—beyond that,” said VP Joe Biden.  Joe Biden even gave him own definition of what marriage is, “Look—I just think—that—the good news is that as more and more Americans become to understand what this is all about is a simple proposition. Who do you love? Who do you love? And will you be loyal to the person you love? And that’s what people are finding out is what –what all marriages, at their root, are about. Whe—whether they’re—marriages of lesbians or gay men or heterosexuals.”

When asked if the administration will finally take a stance on same-sex marriage, Joe Biden claimed that he couldn’t answer that question, but the President has always fought for equal rights, “Well, the president continues to fight, whether it’s Don’t Ask, Don’t Tell or whether it is making sure, across the board, that you cannot discriminate. Look—look the the executive orders he’s put in place. Any hospital that gets federal funding, which is almost all of them, they can’t deny a partner from being able to have access to their—their—their partner who’s ill or making the call on whether or not they—you know—it’s just—this is evolving.”

Joe Biden even cited the TV show Will and Grace as a stepping stone of sorts to give insight to the lives of homosexuals to regular Americans who are ignorant of a certain life style choice. “I take a look at when things really begin to change, is when the social culture changes. I think Will and Grace probably did more to educate the American public that almost anything anybody’s ever done so far. And I think—people feat that which is different. Now they’re beginning to understand…”

These comments by Joe Biden have the administration nervous because they don’t want the public thinking that the Vice President and the President are on opposite sides of any issue. A spokesperson said of Biden’s comments, “The vice president was saying what the president has said previously—that committed and loving same-sex couples deserve the same rights and protections enjoyed by all Americans, and that we oppose any effort to rollback those rights.”