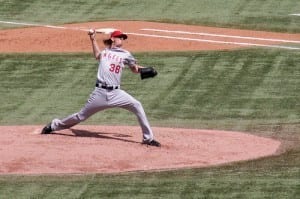 Jered Weaver watched his Los Angeles Angels beat the New York Yankees in dramatic fashion on Monday, but the victory was a hollow one for the ace pitcher, whom left the game in the first inning with a lower-back injury.

Jered Weaver threw only 12 pitches to just four batters before pulling up awkwardly from a pitch. He attempted to throw a warm-up pitch with minimal speed after walking around the mound for some time; he then left the game.

“It felt like somebody stabbed me in the back,” Weaver said after taking muscle relaxants. “I’ve never felt anything like that before. It’s disappointing. You get up for games like this.”

“I can’t really bend over too much,” said Jered Weaver, who continued, “I tried to throw that second pitch, but there was no way. The way the team is playing right now, I’m one of the guys that wants to be out there.”

Jered Weaver came into Monday’s game tied for second in the American League in wins with six and third in ERA (2.61). Jered Weaver finished second in the AL Cy Young Award voting behind Justin Verlander last season. This season he finds himself with a no-hitter and right back in contention for one of the league’s top honors paid to pitchers.

ESPN Los Angeles has reported that the Angels have said that they will wait until Jered Weaver undergoes an MRI and X-rays today, Tuesday, before determining whether a trip to the disabled list is necessary.

“We’re going to look at a couple of things and see what we need to do,” stated Angels manager Mike Scioscia. “He’s stiff now, but we’ll have the exams tomorrow and make a decision.”

Without the pitching of Jered Weaver, the Angels could find it even more difficult to overcome the six-and-a-half game lead held by the Texas Rangers in the AL West.