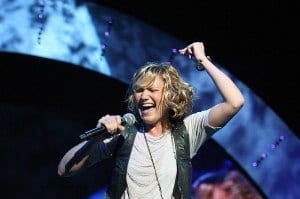 Jennifer Nettles of Sugarland has married her boyfriend Justin Miller.

The LA Times reports that Nettles tied the knot on Saturday near Tennessee’s Smoky Mountains. Nettles, 37, wore a dress by Alexander McQueen.

Nettles and Miller will reportedly have to put their honyemoon on hold, as Sugarland is slated to perform at the Grammy Nomination Ceremony and the CMA Country Christmas Special.

Unfortunately, Nettles and the rest of Sugarland are facing a lawsuit filed on behalf of 44 survivors and the families of four people killed during the Indiana State Fair stage collapse in August. The lawsuit alleges that Sugarland “had supervisory authority and discretion” over the stage size and lighting system, among other concert-related aspects. The lawsuit said the duo “failed or refused to cancel the Sugarland concert despite inclement weather.”

Read more about Jennifer Nettles and the Sugarland lawsuit here.