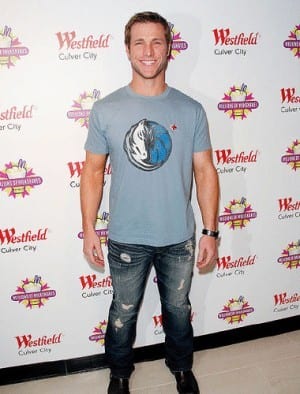 Jake Pavelka and Kristin Chenoweth are rumored to be seeing each other after they were spotted on a quiet and low-key date in West Hollywood, according to Life & Style magazine. Pavelka, 34, and Chenoweth, 44, were apparently very affectionate on their dinner date Tuesday evening, holding hands and “nuzzling” a source said. The two have reportedly been going on secret dates for quite awhile now.

After striking out on The Bachelor, Jake Pavelka may have found what he’s looking for in Kristin Chenoweth. The bachelor and his previous fiancé Vienna Girardi broke up shortly after the 2010 Bachelor season, and Chenoweth dated producer Aaron Sorkin for a few years before breaking it off.

Despite unsuccessful relationships in the past, the two seemed happy and very in-love to onlookers. While they were obviously trying to be discreet with sunglasses, they were unable to hide their affection for each other.

“He just looked star struck and in love at the same time—just beaming and smiling the whole time,” an eyewitness said about Jake Pavelka on the date.

Kristin Chenoweth said last year that she was ready to move on and start a family.

“I want to be married,” the actress said. “I feel finally ready for that.”

Maybe Jake Pavelka is the guy for her.