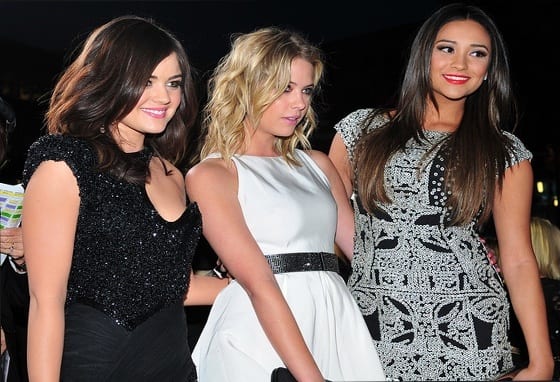 After the big ‘A’ reveal on Pretty Little Liars, a lot of fans are left to wonder how much longer the show will go on.

The series was confirmed for season 7 after its two-year renewal in 2014. During the Television Critics’ Association press tour, Pretty Little Liars producer Marlene King discussed the possibility of a season 8 and a movie.

This isn’t the first time someone associated with the show has teased the idea of a Pretty Little Liars movie. Last year, Lucy Hale, who plays the character Aria Montgomery on the show, mentioned the buzz about a movie during an interview with E! News.

“Yeah, there’s like rumors of maybe a movie — there might be a [Pretty Little Liars] movie,” she said, “but seven seasons will definitely end the show.”

Shay Mitchell, who plays Emily Fields on the show, jokes about pushing the show’s producers to film the movie in Europe or Tahiti — if they decide to make a movie.

ABC Family has yet to comment on a Pretty Little Liars movie or Season 8. However, fans are in for some eventful episodes in season 6B and season 7.

“We just try to keep the train moving as fast as possible on the tracks,” King told Variety. “We haven’t slowed down, and we started in the beginning telling the story at a super fast speed and we try to keep up that speed, keep the twists and turns and the ‘OMG’ moments coming. We’re coming to work and, for me, every episode feels like a mini movie, in a way,” she continued. “There’s that much action in it, there’s that much drama, there’s that much surprise in it. It’s just been really cool to be a part of something that’s so exciting.”

Viewers waited a very long and torturous five years to see the face of ‘A.’ Season 8 seems like a stretch, but I can’t say film wouldn’t be an awesome way to thank us for being such loyal fans.

Check out our interview we had with Shay Mitchell