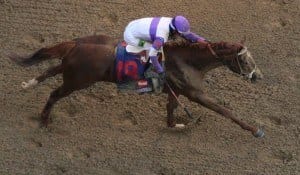 Tendon injury has the colt scratched from Belmont Stakes

I’ll Have Another retired with a swollen tendon after attempting to become the first horse in  34 years to win the Triple Crown.

The extent of I’ll Have Another’s injury left the colt with a swollen left front tendon showing early signs of tendonitis—which could take up to six months to treat. O’Neil commented on the condition, “Could he run and compete? Yes. Would it be in his best interest? No.”

“Yesterday he galloped great, but in the afternoon, we noticed some loss of definition in his left front leg…We did just an easy gallop today. I thought he looked great on the track, and then cooling out, you could tell the swelling was back.”

Belmont’s on-call veterinarian, Larry Bramlage, called it a “slow healing injury”—comparing it to an Achilles tendon injury, which keeps a person off their feet for six weeks.

“This one to the horse is nowhere near that severity,” Bramlage said, “But it takes the same amount of time to rehab it.”

I’ll Have Another, who won the Kentucky Derby, and the Preakness Stakes with stirring stretch drives. The horse was the 4-5 favorite to win the Belmont and to become the 12th Triple Crown winner and first since 1978, according to ABCNews.