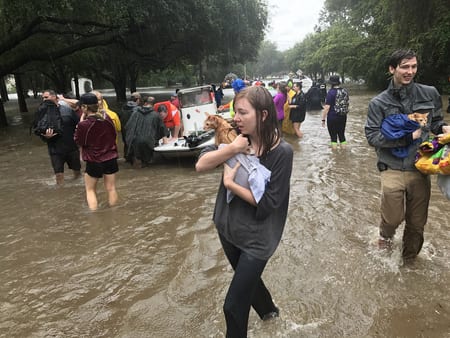 Texas has been devastated by the tropical storm

America faced devastation and tragedy this week as Hurricane Harvey made landfall. Texas was one of the states most affected with billions of dollars worth of property damage and thousands of people uprooted.

Hurricane Harvey is the wettest storm in contiguous United States on record. An estimated 38 people have died in connection with the storm. A Houston police officer and a family of six are among those confirmed dead.

The storm reached peak intensity just before landfall in southern Texas on August 25.

Governor Greg Abbott declared a state of emergency for 50 counties and evacuations were made, however many people were still left stranded as the storm hit. Houston residents were advised to climb onto their roofs in high water areas, and so far, more than 1,000 rescues have been made. 911 was inundated with calls and many stranded people took to social media to ask the public for help.

On Thursday, explosions were reported at a flooded chemical plant near Houston. The site had organic peroxides stored—a product that needs to be kept at a low temperature as they are extremely flammable. It is thought that due to the flood, essential refrigeration was lost and the organic peroxides caused an explosion.

Local authorities and plant officials made the decision to simply let the fire burn itself out as the site was still extremely dangerous. Whilst maintaining the perimeter, 15 deputies inhaled fumes from the plant, believed to be a non-toxic irritant, and were taken to hospital. They were treated and all were released later that day.

In attempt to prevent further damaged caused by Hurricane Harvey, a number of other plants and industrial facilities have closed down. This, however, resulted in millions of pounds of pollutants to be released into the air.

In this bleak time, hope has been found in the many brave volunteers who have rescued countless numbers of people and animals.

In Orange, Texas, strangers have formed a volunteer rescue group lead by Amanda Labove. They have gathered in a parking lot to be sent out on rescue missions and are estimated to have saved dozens, if not hundreds, of lives.

In Houston a local businessman has offered his furniture stores to those who have lost their homes in the Hurricane Harvey floods. Over 400 people are now using the sofas, recliners and mattresses to sleep on. ‘Mattress Mack’ has even given out his personal phone number on social media and said: “If you need something, call, and we’ll try to get you whatever help we can”. Food and clothing was also provided to the victims.

Meanwhile, celebrities and large companies have been donating to the relief efforts. Kevin Hart posted a video on social media challenging his celebrity friends to donate money. Hart has donated $50,000, the Kardashian family have donated $500,000 and celebrities such as Sandra Bullock and Rachael Ray have amazed the public by pledging to donate $1million.

Apple have encouraged their users to donate money to the American Red Cross. The company has managed to raise over $3million for relief efforts so far and have been matching employee donations two-to-one.

It has been estimated that it will take Houston years to fully recover from the damage caused by Hurricane Harvey.  A National Academy of Sciences study found that reconstruction typically takes 10 times as long as the initial emergency period. Only time will tell how long the area will take to be able to function normally again.

Local organisations have already compensated for the time it will take to recover. The Houston School District has announced that all of its students will be eligible for free lunch for the 2017-18 academic year. Additionally, loan borrowers in the area were given added flexibility and the Federal Department of Education have relaxed financial aid procedures for those affected by Hurricane Harvey.

The storm officially ended on August 31, and as the floodwater slowly drained away residents of Texas and Louisiana were able to go back to their homes and start assessing the damage.