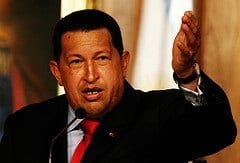 A CNN source says Chavez is dead, but the Venezuelan government denies the claim

Hugo Chavez is believed by many to be dead—but the Venezuelan government is vehemently denying the claim.

Chavez’s death was first reported Wednesday night by CNN Chile, who got the information from a source revealed to be the former ambassador of Panama, Guillermo Cochez. He reportedly claimed that Chavez had been brain dead since December 30, and had died over the weekend of February 23 when his daughters decided to pull the plug.

“I challenge the Venezuelan government to prove me wrong, and to present President Chávez so that it’s known whether what I say is the truth or a lie,” Cochez told CNN Chile.

CNN Chile originally ran the headline “Hugo Chavez is Dead”, but later partially retracted the story. The organization tweeted late Wednesday that “CNN cannot confirm reports of Hugo Chavez’s death.” No other news organization has run the story, and NBC is reporting that their sources tell them Chavez is not dead.

The death of the 58-year-old Venezuelan president wouldn’t be unbelievable—Chavez has been undergoing cancer treatment for months, has had serious respiratory problems and his government admitted last week that his health hasn’t improved. He has rarely appeared in public the last few months and notably missed his own inauguration.

But a photo surfaced this month of Chavez reading a newspaper dated February 14, smiling, with his two daughters by his side. If the photo is recent and legitimate, it refutes Cochez’s claim that Chavez as been brain dead for nearly two months.

But some, Cochez included, are skeptical of the photo’s legitimacy—Chavez has reportedly lost 80 pounds due to cancer treatment over the last four months, but the supposedly recent picture shows Chavez looking plump and healthy.

The Venezuelan government could well be keeping the death of their President a secret. But every source has an agenda, and Cochez has made dubious claims in the past about Chavez’s failing health—casting doubt on his most recent claims of Chavez’s demise.

No other news organization has been able to find a second source to confirm Cochez’s claims.