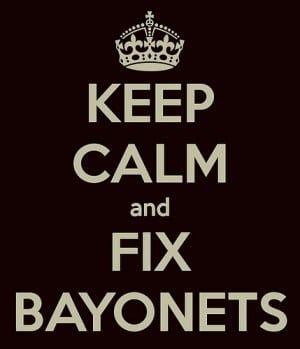 “Horses and bayonets” seems to be the highlight of last night’s presidential debate, referring to President Obama’s comment on what he believes to be Governor Romney’s outdated foreign policy. The phrase quickly spread across Twitter and other social media sites, making it the top trend in the country and third in the world even an hour after the debate ended.

Maybe those tuning in for the third and last presidential debate were bored—it was rather tame—but the phrase “horses and bayonets” became an instant hashtag and will probably be the only memorable part of that debate. Even the Twitter handle @romneybinders changed to @horsesbayonette to keep up with the campaign.

“Horses and bayonets” came about after Romney challenged Obama with the accusations of a shrinking Navy.

“Our Navy is smaller now than any time since 1917. The Navy said they needed 313 ships to carry out their mission. We’re now down to 285. We’re headed to the—to the low 200s if we go through with sequestrian. That’s unacceptable to me. I want to make sure that we have the ships that are required by our Navy,” Romney prompted.

Obama responded with, “Well, governor, we also have fewer horses and bayonets because the nature of our military’s changed. We have these things called aircraft carriers, where planes land on them. We have these ships that go underwater, nuclear submarines. And so the question is not a game of Battleship where we’re counting ships.”

So who won last night’s presidential debate? Probably the Internet.