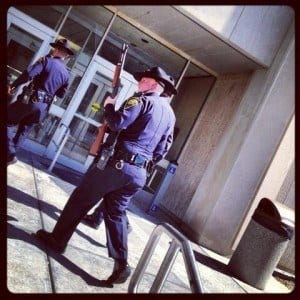 An Indiana University campus and a children’s hospital nearby are both on lockdown Tuesday after reports surfaced of a gunman roaming around the school.

Police are searching for the man, who was spotted by students on the campus of Indiana University Purdue University- Indianapolis, but have not yet found him.

A “severe alert” has been issued and all students, faculty and staff are not allowed to leave the buildings they are currently in.

Tony Carroll, an athlete on IUPUI’s swim team, described the scene in a tweet: “…we’re locked down, were not allowed to leave our classrooms. Helicopters and cops all over.”

The school sent out a text alert at 1 p.m., which read: “IUPUI Alert! Man with long gun seen in lot at Barnhill and Vermont. Seek shelter.”

The man was first seen in a parking lot near the dental school, wearing a long, brown coat and carrying what was described as a “long gun”, most likely a shotgun or rifle.

According to the IndyStar, local police have surrounded the nursing building and several policeman have entered the building armed with shotguns. It is unclear if the suspect is inside the building, but many students and staff are currently being held on lockdown inside the building. One such student, Charlie Elliot, tweeted the scene:

“We were in the nursing building…they’ve just moved us into an ‘interior room’ inside the hospital,” he wrote over Twitter. “It’s us and about 4 other classes all jammed in this room, the anxiety is beginning to grow. Police were well armed and we are locked in this room.”