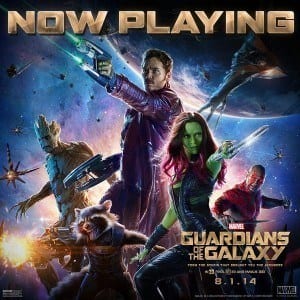 Guardians of the Galaxy is the story of space thief Peter Quill (Chris Pratt) and the aliens that eventually become his comrades and friends. At the top of the film Quill steals an orb that the film’s villain Ronan wants to use to destroy a planet. A bounty is placed on Quill’s head and the would-be Guardians Gamorra, Rocket and Groot come to collect Quill and/or the orb. After they are all imprisoned and meet Drax the Destroyer they join together to escape and later stop Ronan from doing his evil stuff. That’s the plot in a nutshell; it’s fairly simple but it matters so minutely because watching all of the characters interact and banter is more than worth the price of admission.

The Avengers had its fun moments, but you could really feel the plot mechanics at work. We all knew that the Avengers would have to assemble because that’s what the damn movie was called. But with Guardians of the Galaxy, everything was so effortless; the “team’s” purpose for being was explained within the span of several minutes. Comic book movies are so hell-bent on justifying why they do the things they do, as if a higher power of realistic fact checking is keeping score. Man of Steel had to explain the insanely stupid science of a Kryptonian codex as if that’s going to make things more relatable. Guardians of the Galaxy is without that burden of justification – a tiny mining spacecraft is indestructible because the film says it is. Done. Moving on.

James Gunn’s script for Guardians of the Galaxy is super sharp – it is succinct and to the point. Within a few lines of dialogue we know the intentions of a particular character and have an excellent sense of who they are for the rest of the film. The lighting-quick pace of the script is what makes Guardians of the Galaxy so wonderfully entertaining. Just like the great episodes of Arrested Development or Parks and Recreation, if you laugh TOO much you will miss the next great joke.

The performances of Guardians of the Galaxy are equally superb. Chris Pratt plays Peter Quill like the Han Solo of the 2010s (that’s what we’re calling this decade, right?); the cocky bastard who is secretly unsure of himself. Zoe Saldana maintains the unforgiving nature of the Gammorra of the comics while giving a necessary element of emotional accessibility that the character needs. While Dave Bautista may not be a seasoned actor, Gunn utilizes him in the greatest way possible – giving Drax the silliest and most literal dialogue of the film. Vin Diesel voices tree man Groot, the Chewbacca of the film, who only says the same three words “I am Groot” – he does this well. Bradley Cooper kills it as however as Rocket, the murderous alien raccoon. Rocket easily gets the best lines in the film and pretty much steals the show. Marvel Studios’ villains are generally their weak point and Lee Pace’s Ronan is not really an exception to this. Josh Brolin’s Thanos pops up for a bit, but it’s too little of a sample to really evaluate. These flaws are only minor in the larger scope of the film and are easily forgiven.

Guardians of the Galaxy is the smartest major studio film in a while. It is economical in every way possible – it spends just the right amount of time in each piece of the film.  It knows exactly how long to stay in one place – whether that is plot pace, character dialogue or action sequence. With songs by David Bowie, Blue Swede and The Jackson 5, the music of the film keeps the audience tied to Earth while barely spending any time there at all. Guardians of the Galaxy is the comic book movie that you’ve desperately been wanting to see; you just didn’t know it until now.