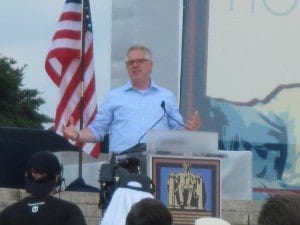 Not that this is news or anything, but yup, Glenn Beck is still a crazy man.  Now he’s pushing some conspiracy theory that the Obama Administration is deporting a Saudi national who was behind the tragic bombings of the Boston Marathon, according to mediamatters.com.

Glenn Beck’s big break on the Boston bombing first arose when Steve Emerson, a guest of Fox News’ Hannity, accused the Department of Homeland Security (DHS) of preparing to deport a Saudi man, who was supposedly “a person of interest” in the bombings at the Boston marathon.

Beck’s right-wing blogs like Blaze, Breitbart.com, WND and Infowars quickly picked up the story, all ready and willing to blame the Obama administration of a conspiracy to cover up the real culprits.

Now, to be fair, the House Committee on Homeland Security has requested more information from Janet Napolitano on the Saudi national who was named the first “person of interest” in the Boston bombings, according to opposingviews.com.

According to a letter published by Glenn Beck’s The Blaze, the committee formally requested a classified briefing from Napolitano on April 19.  The original suspect, named Abdul Rahman Ali Alharbi, was reportedly set to be deported on Tuesday, according to Sean Hannity’s Fox News program.

The Department of Homeland Security has said repeatedly discredited the theory and even explained to CNN’s Jake Tapper that the rumors are confusing two very different men.  Still, Glenn Beck insists on pushing the theory.  Read his comments for yourself:

“We at the Blaze know that this Saudi national is a bad, bad, bad man … This administration is playing an extraordinarily dangerous game. They have very little regard for what it takes to be a citizen. Before the sequester cuts happened, they opened the prison and let illegals out. Who does that? Remember also, the Saudi national that was — is about to get on a plane — involved in blowing the legs off of American citizens, being held in protective custody or being protected, at least, by our administration. He will be put in protective custody and the plans are to deport him.”

Ya, I guess he hasn’t cooled off much since leaving Fox.