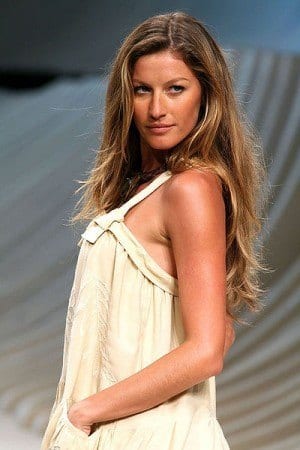 Supermodel wife says Brady can’t do it all

Gisele Bundchen may be standing by quarterback husband Tom Brady, but she isn’t giving his New England team any love over their 17-21 loss to the New York Giants Sunday.

The 31-year-old supermodel, while waiting for an elevator, after Super Bowl XLVI, with other Patriot wives, was videotaped saying, “I can’t believe they dropped the ball so many times. My husband cannot f—king throw the ball and catch the ball at the same time,” reports CBS.

One would have to assume that Bundchen’s comments were refereeing to wide receiver Wes Welker and his missed catch late in the fourth-quarter. Eli Manning and his New York Giants were then able to gain possession of the ball and had an impressive 88-yard drive.

This comes after an e-mail that Gisele Bundchen had sent to friends, asking them to pray for her husband and his team.

“You can’t point fingers at anybody. Wes made amazing plays all season,” defensive back James Ihedigbo stated. “You win it as a team; you win it and lose it as a team. And we lost to a good football team.”