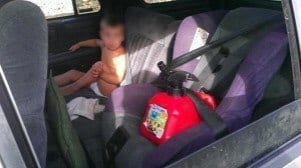 A gas can in a car seat- but not a child?

This is exactly what Aurora police found during a Colorado “Click it or ticket” inspired road stop, CNN reported.

A traffic officer took the photo of the gas can in a car seat during the stop and then shared it on the Colorado Department of Transportation’s Facebook page.

The photo shows the gas can safely strapped into the car seat while the child sat in the seat next to it, simply strapped in by a lap belt.

Commenters on the Colorado Department of Transportation are up in arms over the story and photo of the gas can in the car seat.

Summer Justice commented, “People like this need BIRTH CONTROL in their lives. And why is this not a issue? Pathetic excuse for a mother.”

“Although the photo is disturbing with a tremendous lack of judgment on behalf of the parent, posting this pic on your site is also disturbing with a tremendous lack of judgement on behalf of the Colorado DOT. What gives your officer the right to take a picture of a private citizen, especially that of a child, and post it on facebook? If I were the parent, I would sue the crap out of the officer and your department. Shame on you guys!”  he commented.

Colorado law requires children under the age of eight riding in a motor vehicle to be in a child safety seat. The minimum fine per violation is $82.

Aurora Police said the driver was written three restraint violations for placing the gas can in a car seat instead of the child.