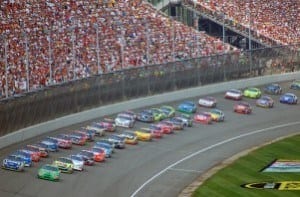 NASCAR will use the E15 fuel in all of its national racing series. Ethanol is denatured alcohol made from corn, which is supposed to be less harsh on the environment. E85 is an 85 percent ethanol blend of fuel that has existed for years, but NASCAR is still using E15, for now.

The “NASCAR Green” logo will be pained on the infield grass and backstretch wall of the Kansas Speedway to promote NASCAR’s efforts. Also, the start and finish line will be painted green, and a Toyota Camry hybrid will be the race’s pace car.

NASCAR is also on a mission to plant enough trees to offset the carbon emissions from races. According to NASCAR, one tree absorbs a metric ton of carbon dioxide over its lifetime, the equivalent of a Spring Cup car driving 500 miles.

Other companies have taken similar measures to help reduce their carbon footprints. For instance, Ford plants a tree for every lap a Ford driver leads in either of its racing series, and UPS partnered with the Arbor Day Foundation to plant over 8,000 trees.

NASCAR’s fuel is supplied by Sunoco, with the ethanol distilled in New York and blended in Pennsylvania, according to USA Today.