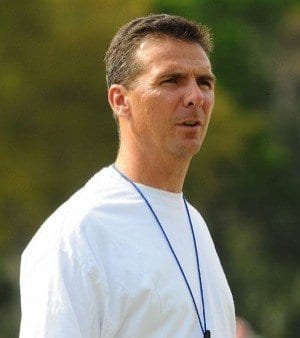 Urban Meyer hired by OSU after rumors swirled about the offer

It’s official. Urban Meyer has been tapped by Ohio State University to be the head coach of the Buckeyes football team.

The Detroit Free Press reports that Meyer has officially been hired by OSU. So far, OSU has not made any official announcement regarding Meyer, but ESPN is also reporting that he has been chosen. Meyer had previously worked as a commentator for ESPN after resigning from his position as coach of the Florida Gators.

Last week, we reported that Meyer had agreed to a seven-year $40M contract with OSU. Many fans joked that OSU hiring Meyer was the worst kept secret in college football.

As we reported last week, rumors swirled about Meyer joining the Buckeyes after he hinted he would be in a good place to take on such a role. Meyer was also bumped from last Saturday’s Big Ten broadcast, which helped fuel rumors that the negotiations between OSU and Meyer were drawing to a close.

You can read our previous reports about Urban Meyer’s bump from the Big Ten broadcast and his rumored contract.