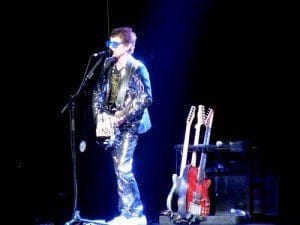 Just along for the “Ride”

Where to next? Ask MUSE, as their new “Follow Me” begins with the beating heart of front man Matthew Bellamy’s son’s soaring sonar of a heartbeat. Let the pounding of your heart symbolize the pounding of your feet on the quad’s gravel as you make your mark this academic year. Though the ultrasound may seem like the recording of a crowd of marching protestors to match the band’s past common themes, it is the contrary. Don’t let the toils of college turn you into a sizzling robot. Staying calm, but remembering what and who means the most is vital. Bellamy’s gargantuan honey vocals implore patience and understanding that his footsteps will forever be visible. Whoever your role models are, don’t let a shadow of a loaded schedule cover the path you wish to see.

Instead, “Ride” with Lana Del Rey. What sets you free? Follow those footsteps to the place where the breeze kisses your skin as you pass. Don’t let the squeaking in your tin legs distract you from the dose of melancholy you should allow yourself once in awhile. Del Rey emits an orchestral sound from her throat like that of the pouring sun’s rays, which blossom out of the orange strings. The agony in her “don’t leave me now” is brought down with the setting of the sun at four p.m., but lifted once again with the reunion of her soul with her passion. Don’t fear Lake Michigan’s bite on your nose; hold your knowledge and love close.

But really, “Wasting Time (feat. Chance The Rapper)” may indeed be the time spent dwelling. The bass opens this Kids These Days song much like an indecisive heart that beats anxiously, waiting for the outcome of a choice. When there’s a fork in the road, love can be lost and so can the self. Chance The Rapper laments of a lost love, and of regret, his downtrodden vocals contrasting with the tunes of the trickling guitar. The water under the bridge flows inevitably, no matter what the choice is. KTD vocalist Liam Cunningham trades off turns with Chance, and Vic Mensa, the band’s resident rapper as they exchange their own struggles with individuality.

Keep in touch with the whos and the whats that give you, you.