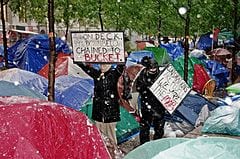 Large Occupy encampments in Los Angeles and Philadelphia were broken up early Wednesday, as police arrested hundreds of protesters who had been camped out for the past two months.

According to the New York Times, police officers raided the Los Angeles Occupy camp around 12:30 a.m., causing most of the protesters to abandon their tents and gather in large groups in the surrounding streets. When the raid ended several hours later, the police said they had arrested about 200 people. Officers fired bean bag rounds to try to convince some protesters who had climbed trees to vacate the premise. It was not immediately clear if the rounds caused injuries, the Times reports.

1,400 officers had been called in for the operation, more than any event since the Democratic National Convention in 2000. After much of the park around City Hall had been cleared, Mayor Antonio R. Villaraigosa told reporters he was proud of the way the police had performed, especially of their decision to employ force only as a last resort.

“I said that here in L.A. we’d chart a different path and we did. In my life, I have never seen a more professional, restrained police force,” he said.

In Philadelphia, police officers raided Dilworth Plaza, adjacent to City Hall at about 1 a.m. The raid came more than two days after a city-imposed deadline for the protesters to vacate. A police spokeswoman said that at least 50 people had been arrested and three officers had minor injuries.

Until the last week or so, Philadelphia city officials had maintained a cordial relationship with the demonstrators, even supplying them with electricity, until they needed them to move so that the city could begin a long-planned construction project at the plaza.

In L.A., Villaraigosa had also given the demonstrators a deadline but city officials had given them extra time in order to avoid making arrests, the Times reports. The strategy appeared to have worked as the camp had shrunk to about 250 tents, half of what it had been at its peak.

Villaraigosa said, “We have taken a measured approach to enforcing the park closure because we have wanted to give people every opportunity to leave peacefully.”