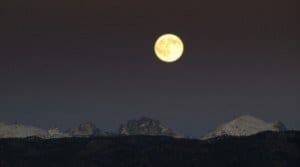 Full Moon 2013 arrives today and according to the Farmer’s Almanac it will be a “snow moon.”  What does this mean? Full moon 2013 the almanac states, comes as “the heaviest snow usually falls…so native tribes of the north and east most often called February’s full Moon the Full Snow Moon.  Some tribes also referred to this moon as the Full Hunger Moon, since harsh weather conditions in their areas made hunting very difficult.”

Full Moon 2013 also brings along with it a 3.5 foot high tide that will occur at 7:30 pm EST, a perk that surfers, fishers and beach walking romantics alike should take into account and definitely take advantage of.

From earthling’s perspectives, Full Moon 2013 will be directly opposite the sun during its preliminary afternoon to evening appearance.  Scientists will also air a live webcast of Full Moon 2013 from the Slooh Space Camera, as they observe the lunar phenomenon from an observatory in the Canary Islands.  Astrology aficionados and lunar lovers can definitely get loony for a long night of moon watching.  This is the only night in the month when the moon is in the sky all night long!